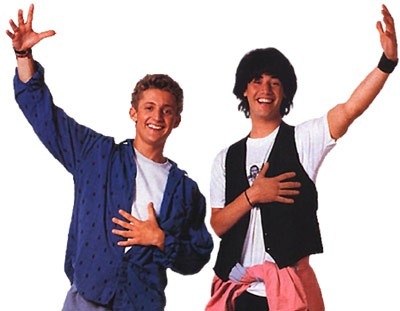 Note: A slightly different version of this post appeared on my old blog and at the Religious Herald during last year’s Lenten season. As I was editing and compiling a Lenten devotional for use this year, I felt that this was an appropriate share today. I’ve updated a few things and tidied it up a bit. Hopefully, it will help you rock on in your own life and maybe save the world in the process.

Woke Up This Morning with My Mind…
The church where I used to serve partnered with a rehabilitation organization in town with whom I occasionally had the opportunity to worship. At the beginning of all of their worship experiences, they sing a song that repeats this same opening line – “I woke up this morning with my mind (my mind) set on…”. Different men from the group then sing out whatever was on their mind as the microphone is passed. It is always an important reminder to me to pay attention to what occupies my thoughts, as that can very easily end up shaping the course of my day.

So, I woke up this morning with my mind (my mind) set on Bill S. Preston, Esquire and Ted “Theodore” Logan. While it is, strangely enough, not the first time I have woken up with these two fine gentlemen on my mind (John, you might as well buy a new copy of the DVD), it was the first time I had thought of them in this way. Let me pause, and suggest that if you have not yet seen this fine film, “Bill and Ted’s Excellent Adventure,” please do so at your earliest convenience. In brief, it is the story of two slacker students and their quest to graduate and become the band that will create the music that will bring peace to the earth. To graduate, they must pass a history final, and to learn history they actually go back in time and bring historical figures to their history final.

It is, admittedly, a ridiculous premise — then again, to some so is the concept that the death of one man has brought salvation to the entire world.

Life Is a Highway
While the plot has intricacies, the vast majority of it can be summarized by understanding that they must undergo a significant journey in order to become who they are destined to be. For quite some time in modern, post World War II Baptist life, there was little emphasis made on the journey and much made on the outcome or destination. We were concerned with getting people saved, not with helping them walk along the path of salvation. It took a Methodist church to teach me about Lent, the journey towards Easter. Until then, all I knew was that we were in church and “poof” it was Easter. As powerful as Easter is, it is more powerful when we approach it with the reverence and intentionality that the Lenten journey requires.

Jesus ≠ Godbot
Or, think about it this way. Jesus himself did not magically arrive at the cross of Golgotha or the empty tomb. No, he grew into it, journeyed towards it, and invited his followers to do the same. Lent is the season that calls us and reminds us that we to are on the journey to become who we have been called to be.

For several Lenten seasons, my wife and I read the book Lamb by Christopher Moore (you can find it here). It is not for the easily offended, but I have never found it anything but profound. It is the fictionalized account of Jesus’ life, including the childhood and young adult years never recorded in scripture. The Jesus portrayed therein (actually in the book he goes by Joshua) is very human, earthy even, though the book never denies his divinity. That very human portrayal (and it is a comedy through most of the book) makes the journey fresh for those who are in need of a new and non-traditional look at the life of Christ. It is a reminder that Jesus himself was not a God-robot, but rather a journeyer as well.

The Road Goes on Forever, and the Journey Never Ends
At the end of Bill and Ted’s journey, they arrive full of a fresh knowledge of history with freshly minted guitar licks and rock skills to graduate and change the course of history. They are as awkward and goofy as ever, but the film lets us know that they are the ones who bring peace to the earth. There is a great beauty in that ridiculousness  There is a great hope and freedom in the realization that all of our stories are still being written and that no matter how awkward and strange they seem, they too can end with wonder, joy, and success.

There are those who don’t believe we can be what we’ve been called to be, as well. But we are not done yet. We too are called to keep walking and to follow the road through the dark places, through history, until we too find ourselves revealed and fulfilling who God has always known we are.

I hope you will journey this Lenten season. If you do, rock on. If not, the world may never know how awesome you might have rocked.