Note: With spring break looming and multiple children playing (and adults watching/helping) in the zen garden in my office, I was reminded of my tumultuous relationship with my inner critic (Little Richard, but not *that one) and sand itself.*
  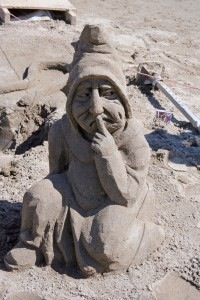 I’ve got this little problem that I think I hide well most of the time. I’ve crafted my Jungian mask and public persona to come across as fairly laid-back, cool, and collected. At least that’s what I tell myself I’ve done. Some who know me see through the facade rather rapidly.

But deep down, I’ve got this tiny little perfectionist who lives inside of me, the sometimes overly-critical, overly-vocal, evil twin of my inner child. I’ve named him Richard, not because I know anyone named Richard who is all that critical, but because it seemed a most fitting name. His playful brother is named Luke, because I like Jedi and am a nerd-child of the eighties.

This past summer, Richard reared his ugly head during a beach vacation. As we were preparing to leave the beach, I spent time trying to get the sand off of the sand toys and discussing possible strategies for rinsing our feet in the sandy beach shower before reentering our car.

In the midst of my misplaced obsession, my wife said, “You’ll be a lot better off if you’ll just embrace the sand.”
I know she’s right.

The sand at the beach is inevitable; as far as I know, you can’t have a beach without it. Not only that, but there are good things about the sand. It is soft, moldable, and beautiful. But when I’m leaving the beach and want to segment the sandy part of my experience off from what will be the rest of my vacation experience (going out to eat, driving around, relaxing indoors, etc.), I don’t care about it’s positives, I only see that it is the anti-Visa: everywhere I don’t want it to be.

But my desire for the sand to be different does not and cannot change it. It is a force beyond my shaping. The only thing I can really change is whether or not I embrace it.

Richard, that self-critical and obsessive/perfectionist part of me, wants to live in a world free of sand. But to do so, it means that he won’t be able to live in reality. He will continue to be lonely in the imaginary and sanitary world of his creation.

It’s really about a lot more than the sand. He wants to be able to control everything and everyone. Sometimes, I let him try. It never ends well. But I can’t live by shutting him out or denying him, because he is a part of me too. Denying the dark and unpleasant parts of ourselves never leads to health.

Instead, Richard needs to be embraced as much as the sand itself.

I find that when I do embrace that part of me that it loses much of its malevolence but maintains its healthy aspects. There’s nothing wrong with wanting some order and cleanliness and thinking critically, after all. But it’s only by living honestly with myself and my idiosyncrasies that I can really begin to understand when Richard is right and when Luke’s opinion is the one that matters.

For me (and maybe for you, I hope), this is important self work that I have to come back to time and time again. The real world is full of metaphorical sand. Some of it must simply be embraced. Some of it must be cleansed and fought against. The sand that breeds injustice and dehumanization can’t be allowed to stay put.

I can’t do either the embracing or the cleansing well when I don’t know and love myself wholly. Only then can I know how to proceed. I’d like to imagine that all of that is somewhere in line with the “love yourself” part of the tripartite flow of love in the Greatest Commandment.

The same concept is true for our organizations and families, as well. Only when all parts are known and loved can we listen to the correct voices in any given situation. We are not, after all, called to be a monolithic family of faith. We are called to be a community of love – for all of us.

Some of us often like to quote the Serenity Prayer (probably first penned by Reinhold Niebuhr during a beach trip), knowing we need to work with both embrace and change. But how many of us really want to embrace that which is unchangeable? How many of us want to change what we can? Or how many of us want to simply play at life, trying to change the inevitable and wasting our energy until we can achieve no real change?

I think I’ll start by trying to let Richard know that I love him. Maybe I’ll try to get him, Luke, and I together on a playdate, take the time to know them both. I’ll live with the sand in the meantime, embrace it even, trusting that out of grace and love, I’ll figure out what’s important and be healthier and happier in the process.