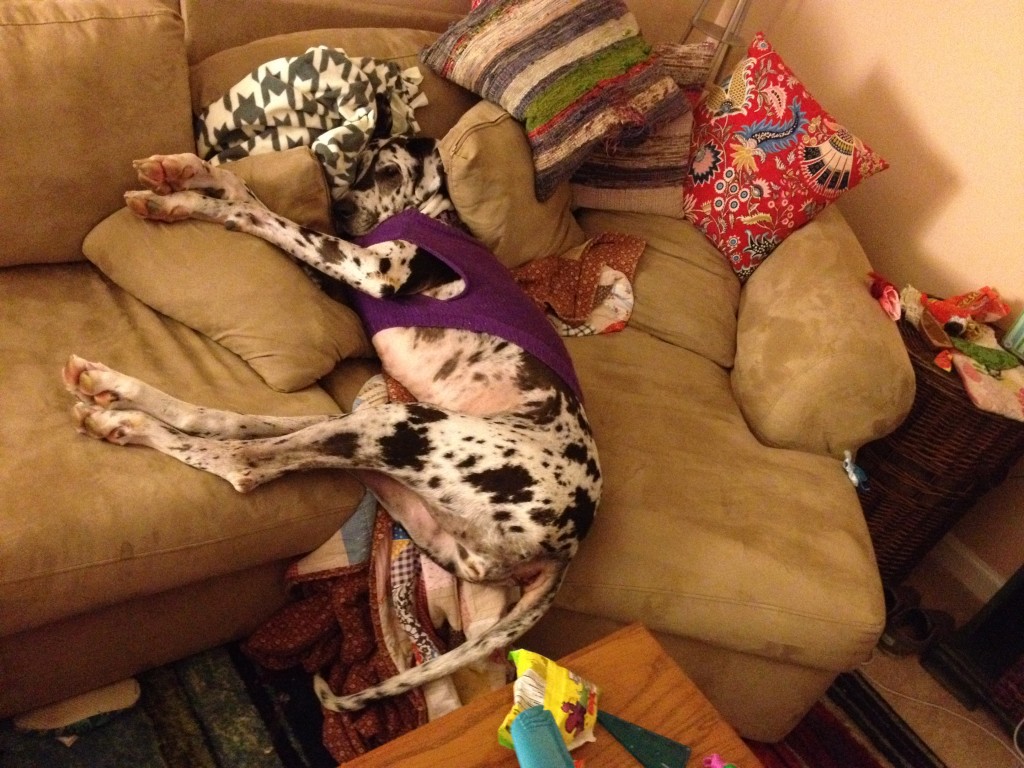 My dog, not my son, but she teaches me how to relax.

Sleep Fidgets
Right before my son goes to sleep, he normally goes through a phase of intense fidgeting. I’ve come to understand it is his body’s way of getting out the last little bits of energy that might keep him from having a good night’s sleep.

Before I had that understanding, however, I used to work diligently as I rocked him or held him to get him to be utterly still so that he could go to sleep. I knew, from my own experience of the necessity of utter stillness in preparation for the journey into dreamland and from his sister’s sleep habits, that it was of the utmost importance for him to be utterly still as he was preparing to enter dreamland. There would be no rhythmic swaying or last-ditch karate kicks to the lullabies I was singing – stillness was the only appropriate response.

Except for him, it wasn’t.

Eschewing Stillness
I’d like to say that I naturally arrived at the realization that he would go to sleep much more quickly and smoothly if only I would let him fidget. I can’t say that, though. It was my wife who pointed it out.

“Just let him fidget,” Jill said to me.

I’m hoping I was smart enough to offer no response. I doubt it, though.

She was right. I could wrestle him to sleep for 30 minutes while demanding stillness, or I could let him fidget for five minutes and then listen as his breath grew deeper and his baby-snores began.

His own body knew what he needed. What I was forcing on him was actively not helping him get to sleep.

Non-transference
One of the hardest things for me as a parent (and probably as a human being in general) has been to learn to stop transferring my own idiosyncrasies onto my children. They are clearly a part of me; my daughter has my genetic predisposition to dawdling, and my son sounds like a miniature version of me on occasion. But they are not me.

They don’t need me to dictate through my own anxieties how they should approach any particular undertaking.

Even though I have learned to let my son fidget to sleep, I still find myself teaching him to obsess about the angle of the curve of the train tracks that he has asked me to help build. I still find myself forcing my perspective on his projects, wanting to aim for a false perfection instead of enjoying the perfection of the irreparable moment we will spend together.

It is just a IKEA train set. No lives are at stake. It will be destroyed shortly after it has been built.

My children will, over time, develop their own idiosyncrasies, their own neuroses. They can choose to adopt some of mine, I have no need to hide them from them. But I want them to have the choice. I don’t want to force them to be replicants of me. They’re not robots, I shouldn’t try to program them in that way by intention or accident.

Instead, I see that if I am to do my job right, I am to help them more fully develop their own identities. I am to be a facilitator, not a dominator. They are bursting with possibility, and I can only help them fully realize it when I make sure it is about them and not about me.

A Wider World
This is why it takes a village. I need other people to help counteract my own particularities. I need friends and grandparents and a wife who tells me to relax.

Even more, this is why we need each other. This shaping of lives is not only about parents and children. It is about the everyday, mundane ways in which we shape one another.

I know, in my own life at least, that I have often approached friends and strangers alike with an attitude that is seeks to make them more like me for the sake of my own edification. I’ve been uncomfortable with letting people fidget in their own skin.

But I could grow more and learn more if I’d let people be themselves. I could even, perhaps, help make the world a better place by seeking not my own edification but the growth of others.

I know I’ve benefited and grown from relationships with people who’ve let me fidget until I’ve grown more comfortable in my own skin. I hope that I can learn to do the same for others.