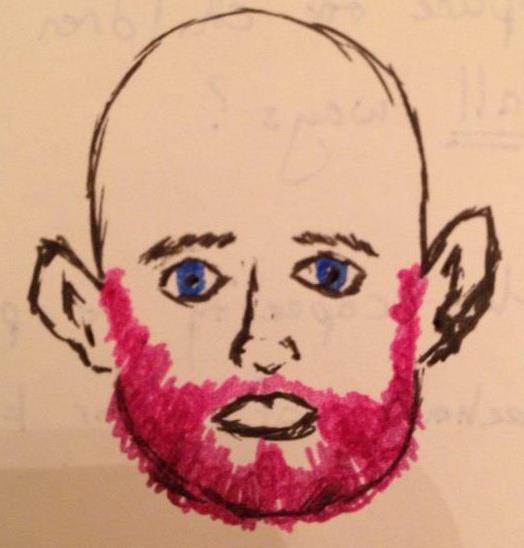 It’s my ears that make me slow, not my lack of running.

This article appeared originally at Religious Herald and my previous blog. Seemed an appropriate repost on a day when many of us have spent time in close quarters with one another waiting for the next Snowpocalypse.

Some Things Are a Drag
Even before my hair started to go and betray me, migrating lower on my face and body while my head began to show through up top, my ears have always extended at a quite profound angle. They are, in fact if you look closely at the picture of me above you can clearly see this for yourself, the chief reason I am a slow runner. They are decidedly non-aerodynamic. They catch wind like honey catches flies, somehow drawing this air toward them and into them until it becomes thick like the smog behind a city bus in Dubai.

I used to be embarrassed by them. They were large, and yet unlike Dumbo they had not produced in me the ability to fly.

Then I met my wife.

Magic Feathers
Jill, the aforementioned wife, is quite fond of my ears. They move upward when I smile deeply. They are a better indicator of my mood than my words or the way in which my face is set. Additionally, they are a genetically good match for her own petite and delicate features. By association with her, I have found my ears redeemed.

Redemption is a funny thing. It is the disruption of an alarming and problematic situation with an unexpected and grace-filled reality. It is the deeper magic of which C.S. Lewis wrote. It is the tomb which stands empty.

As one who has loved words his whole life, I have often thought of their redemptive power. I don’t mean the hollow “God needed another angel in heaven” mantra often offered during times of heartache. I mean the ability of language to craft a narrative of hope in the midst of despair, of inclusion in the midst of isolation, of love in the deepest pits of hate. I ponder the power of the dream had by a long dead man to still shape our country’s dialogue around race and civil liberties. I hang on images wrapped up in stories about mustard seeds and leaven and sons who have returned home to find a father with arms open wide. Words, while they cannot do it alone, have long been humanity’s way of shaping and describing reality in such a way that redemption can be found.

I think it is important to recognize and own the power of language, so that we do not use it in vain. We must also continue to be careful with our language, to keep in our minds the power of words to gather a mob and engender hatred that leads to genocide. We must be constantly aware of the presence of Kristofferson’s “silver tongued devil” and do our best to make sure that devil is not us.

All of Us Is for Redemption
As much as I have been enamored and aware of the redemptive power of language, I’ve become increasingly aware that there is another channel of redemption which I have often overlooked. That is to say, I’ve discovered that not only have my ears been redeemed by the love of my wife, but also that they are their own unique instruments of redemption.

It may be because my spiritual gift is the unrecorded gift of “cynicism” or because I’ve been well taught through debate and schooling to listen in a way that prepares me to deconstruct the words of the other, but I have come to understand that my redemptive listening leaves a lot to be desired. I often listen to people while running their conversation through my mental list of shibboleths, ready to pounce when they have said the wrong thing or not said the right thing. I would like to think that this pattern of behavior is non-normative, but I’ve been around long enough to know that is simply not the case. Many of us listen just long and well enough to be dismissive or disruptive of what the other is trying to say.

On the few occasions when I have been centered enough or graceful enough or tired enough to actually listen with ears that are ready to believe the best about other people, what I have found is that they are broken, hurting, and looking to belong just as badly as I am. And I even find, on those rare occasions, that my ears work in conjunction with my words and that out of our mutual brokenness God may want to speak healing and redemption through me. Of course, to listen with grace-filled ears is to endeavor into this dangerous territory of faith where I believe there is enough love to go around. It is to embrace the other just as they are without needing them to use just the right words. It is to embrace the other even if they do not embrace me.

I’m not comfortable with that idea. It fits me like a too-snug toboggan, squishing my pronounced ears too flat against my bald head. But after a while, I realize it is the only way to stay warm and alive in the midst of life’s winters. I’d rather suffer a little discomfort than lose my ability to hear at all.