Only If You Can Skate 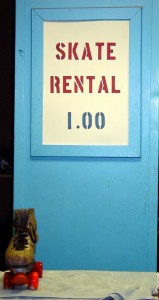 ***Thanks to Jill, my lovely wife, for helping to tighten the metaphor like an old pair of skates.***

I sometimes wonder if there wasn’t a bit more subtext involved when Jesus talked about children. Maybe in some “original manuscript” (trademarked 32AD United Fund for Fundamentalists) Jesus says, “If you want to enter the kingdom you must become like children – but I really mean children who behave themselves well all the time and just ooze wide eyed innocence.” Or maybe there were some secret hand signals going on when Jesus said to the disciples, “Suffer the little children come to me.” Maybe he was pointing to particular ones, and not to all of them.

I’m mostly” kidding. The perfection and likability of children is probably not why Jesus holds them up as role models for entrance to the kingdom. Perhaps, instead, Jesus holds children up as an example because what makes them different than adults is a total lack of guile. Adults, particularly when we are not in our own “best places” (trademarked 2013 by the United Fund for the Belief in Unreal and Imaginary Things), can often be convinced to say mean things in nice ways or to not say anything at all and sit silently judging like their mommas told them. Children, on the other hand, will simply state what is on their mind.

As an adult, were one to see a particularly large person at the water park, one might begin to make assumptions about whether or not that person is lazy. Or an adult might begin to make comparisons, thanking God that at least one’s waistline is not “that” large. A child might simply ask the following question: “How old is the baby in your belly?”

As off-putting as that might sound, I think it has more place in the kingdom of heaven than all our well intentioned silent judgements. Children live out loud our inner thought processes and in the light of day much of the judgment is stripped away to be replaced with curiosity.

That doesn’t mean it doesn’t hurt to hear a child comment on your weight. And it doesn’t mean that children don’t hurt each others feelings. In fact, last week one of my daughter’s classmates came up to her and said, “I’m having a roller skating birthday party!”  followed by “Do you know how to skate?”

My daughter replied, “No. Not really.” (And I must admit I was proud of her for being honest and not over-estimating her skills).

Her friend replied, “Oh, never mind then. You’re invited only if you can skate.”

I can’t imagine that this is a real rubric that a parent would set for his or her child’s birthday party invitee list. I don’t know how much truth there was in the statement. After I got over my impulsive and wrong-headed desire to shield my daughter from any emotional pain, I began thinking about how ludicrous it was to think that only people who could already skate could come to a party at a skating rink. A skating rink is exactly the place they need to go if they can’t skate.

Then, I moved from thinking about this particular incident with the girl and the birthday invite and began to think about how ridiculous we adults are with our silly little clubs that we create and maintain. We insulate ourselves with modern-day shibboleths that seek to help us, under some logical guise most of the time, create and maintain barriers of “us” and “them”, “inside” and “outside”. Skaters only, please.

We create these barriers because we are afraid. Afraid that we won’t have the power any more if we don’t cling to it. Afraid we might be hurt. We want to make sure that only people who can metaphorically skate their laces off are able to enter our rinks and our parties.  Because if we are honest, we know that teaching people to skate is dangerous; they might drag us down with them. In fact, they probably will. But we need to stop believing that the point of skating, metaphorical or otherwise, is to not fall down. Whether it is sweet skating skills or a learning to live a whole-hearted life, there are somethings that are worth the pain of falling down. It is, after all, all those falls that finally work together to teach us how to live and move gracefully.

We need to be willing to embrace that risk in order to be more fully alive. We need to get over our immature desire to exclude and grow up to understand that we are called to teach others and be taught along the way. We need to be willing to mature, to become fully human so that we can experience change and growth not apart from others but with them. Maybe that is what this “free skate” life is really all about. I hope you’re willing to lace up with me. I hear there’s some sweet disco beats waiting for skates on the floor.