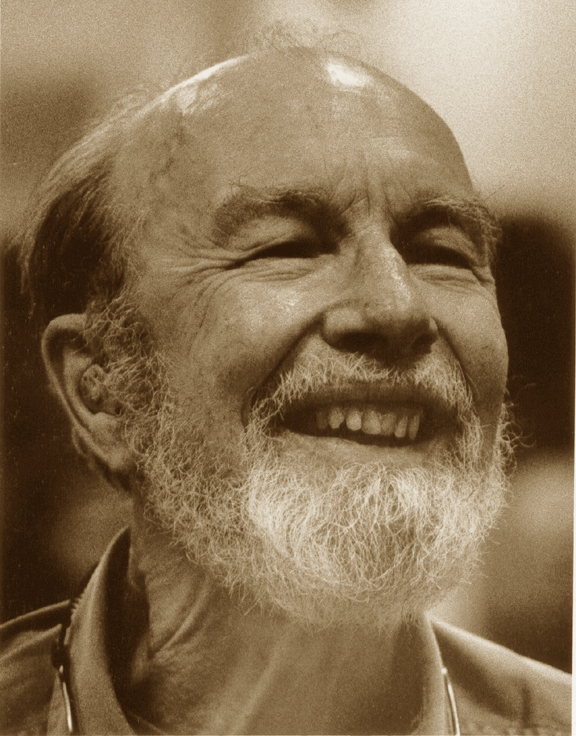 So Happy – and well bearded.

My last sermon of 2013 was named after a Pete Seeger song – “Turn! Turn! Turn!” Based on a Ecclesiastes 3, it is a text that I’ve mostly used for funerals. I wanted an opportunity to use the song in a non-funeral setting. Now, as I think about Seeger’s passing, it is a comforting song in my head.

In a purely logical sense, most people in my generation shouldn’t know Pete Seeger. When he passed away on Monday, he was 94. He wrote songs that didn’t feature the latest and greatest in pop sensibilities (unless you count the Seeger banjo as cutting edge). He didn’t fit in or try to match the sensibilities of the culture., even when he was a frontrunner of it. When Dylan went electric, Seeger abhorred it, hating to see the 60s folk-revival move in such a direction. He looked to popularize songs that were old, to make relevant the music of generations that had gone before. By most logical calculations, this should have made Seeger a name that is not remembered by so many.

And yet, his face is on many news outlets these days precisely because he will be missed by so many.

This man who wrote and sang anachronistic music that sometimes flew in the face of popular opinion (he was, after all, blacklisted from television and radio for 12 years) changed and preserved the face of American music. When the culture moved out of the folk movement, he did not stop and become reclusive. He continued to play the music he was passionate about. And he allowed his passion to help make commentary on the state of injustice in the world around him. Even more remarkable, is that in the midst of being a rabble rouser and artist who recorded over 100 albums, Mr. Seeger seemed at all times to be happy, a sometimes elusive state for an artist.

It is this last fact, his happiness and openness, that has made Pete Seeger such an enduring icon. He was a true believer. He believed in the power of music to change the world, and he believed that music was designed not to be simply listened to, but sung. He was remarkably invitational in his approach to music, performing across demographics and taking time to encourage others to learn the songs and sing along. His music may not have sounded modern, but he believed the message could be. He believed that music could help to shape the opinion of the populace, help them to see the world from a different perspective. True believers are often powerful and dangerous.

As a baptist, a free-church thinker, he has been a role model for thinking of ways to make the old ways relevant, to help the old songs feel fresh on new tongues. He has been showing me how to hold with grace and dignity the tension between a belief in tradition and a necessity to meet the world where it hurts. He has been showing me how to sing the song I was born to sing with a smile, knowing who I am and what I stand for without shoving it down people’s throats who disagree.

Pete Seeger walked a fine line well. And while I may not be a musician who can change the whole world, I think Mr. Seeger has been trying to show me that I can, and should, shape my corner of the world.

So, for Pete’s sake, I will make sure I am standing up for what my heart knows is right.

For Pete’s sake, I will make sure the song I am singing fits well within my heart and on my lips.

For Pete’s sake, I will remember the old tunes that hold the deep power to shape the world.

For Pete’s sake, I will make sure I take the time to sing slowly, to help those who don’t yet know the tune have time to learn and sing along.

For Pete’s sake, I will remember to be happy while I’m working, knowing that it is only out of that place of joy that I can really effect change.

For Pete’s sake, I will remember to be a believer when cynicism overwhelms me.

For Pete’s sake, I will not give up when life seems overwhelming.

I will remember, for Pete’s sake and the sake of the world, that there are plenty of great examples of people who found themselves against significant odds and still managed to change the world from the fringes. I will remember this saint who has gone before and try to sing a little louder in his absence.