Note: I was reminded of this post from over year ago after thinking about why we say the Lord’s Prayer together every week in church. We encounter people in our midst every week who feel ostracized and alone. We have the salve of grace and presence to offer in the face of despair, but do we slow down to whisper to them? 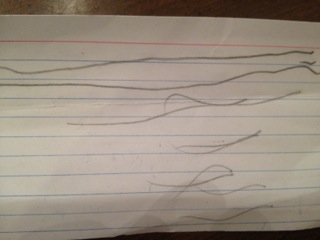 The best effort of one of my children.

A few weeks ago I had the rare opportunity to sing next to my daughter during Sunday morning worship. She loves to sing, and reads well for her age, but she is not capable of reading fast enough to sing along with the congregation. I began to tell her the words to the lines of the songs coming up, giving her just enough time to hear my voice in her ears and then follow along as the song progressed. She was learning this song, this deep and ancient song of longing (“O Come, O Come, Emmanuel”) by repeating to the best of her ability what I whispered in her ear, and I could tell that it made her experience deeper. No longer was she an outsider staring at words as a song she didn’t know was sung around her. Suddenly, she was a participant. By doing the thing that came most naturally to me, leaning down on her level and calling her to sing the song I loved, I was helping her move from observer to celebrant.

In thinking about this phenomenon of movement from outsider to insider, I was reminded of a note card I had kept from Sunday worship a few weeks ago. Foolish enough to enter into a month long series of sermons based on Job, I had attempted to engage the congregation differently by asking them to fill out cards describing commonalities with Job each week during a time of meditation in the middle of the worship service. Later, my wife told me that both of my children had, while on the brink of tears because they didn’t fully understand what I was asking them to do, scrambled to finish “writing” on their cards before the time had come for the cards to be returned. The cards were gathered, and during the time of response near the end of the service, people had the opportunity to collect a card that was not their own in an attempt to help them feel connected to one another and unified in the common theme of human suffering. One of my children’s cards didn’t make it back to the front, that is the one I still have. The other one must have been picked up by another worshipper that day, and who knows what they made of what they found on that card.

To the writer, I know it was nothing short of their very best. They had poured their soul through graphite onto that blank page in an attempt to connect to their community, their dad, and God.

What if I could learn to see in such a grace-filled way that I could believe that all people, not just my own blood, were doing their best to connect to community, others, themselves, their past, their future, and God in all the things they do, whether they fit my preconceived notions or not? What if I could have the softness of knee that would let me bend down next to any person, and not just my own daughter, and whisper the sacred songs to them so that they might join along?

We all learn by repetition and modeling, by following the lead of those who we trust love us. What is difficult, then is that I know somewhere that if I am to truly be a follower of The Way then I must radically broaden the category of those I love to incorporate the entirety of God’s children.

Instead, I am often a bit of a jerk, stuck in some awkward high school moment where I still believe that the perception of others is fundamentally more important than the embrace of the other.

There are implications in this for all of us who participate in some type of congregational life, whether it is contemplative, traditional, emergent, or contemporary. Do we know what parts of our communal lives are important enough to teach to others? Are we capable and willing to distinguish between what is important and what is preference? Are we intentional about maintaining the oddness of our life as followers of The Way together in the world while also bringing others into our chorus?

Even more, there are implications for the way we live out each moment. As for me, I’m painfully aware that even when I am not kneeling next to her, my life is whispering a refrain in my daughter’s ear, a stumbling attempt to teach her the melody of the song that has formed the rhythm of my own life. I want to remember this scrawled card, this attempt to reach out and find belonging. I want to remember that I am a part of this larger human family, and that all of us are singing and all of us need help to know the words. Maybe then I’ll not only sing the song, but live it too.

In the midst of the stream of heartache we encounter nightly on the news, we each have the opportunity to form a part of the larger chorus of someone’s life, to sing the songs of meaning and narrative between various points. We can sing the songs appropriate for the times: dirges and laments when mourning is all we can do, songs of deliverance when the way seems too dark, or songs of rejoicing when joy breaks forth. What we can no longer afford to do is refuse to sing. I will bear my sin through broken notes, but not through the silence of indifference.